This is the new skate spot in Köln, on the ‘other’ side of the Rhein, underneath the Zoobrücke.
It is not DIY. Otherwise, it would be much better. But I won’t waste this space complaining about how rad it would have been if there was some kind of a bowl, instead of these little concrete obstacles strewn here and there.

This small session took place July 5th, at a birthday party for Ari, one of the few girl transition skaters in Cologne. I brought my camera along just for the hell of it, because the best camera is the one you have with you.
The more heated session was winding to a close by the time I arrived, but Lennart Kiepe was still keeping it hot with some solid ollies over the ‘hip’ and some ollie to fakie attempts. 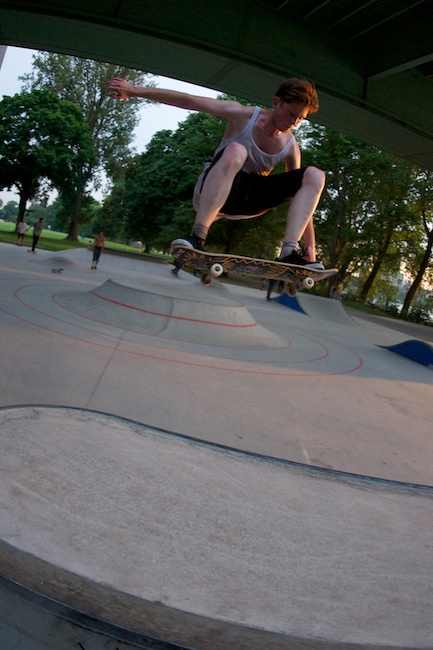 Lennart Kiepe. Ollie off the hip

Jan Wermes. Ollie off the hip on the little concrete transition.

Jan Wermes. Blasting a backside air over the Volcano, under the bridge.
Photo: J. Hay

View from the bridge on the bike ride home….