The year was the summer of 2008, if I remember correctly. The skate scene in Riga was pretty much skatepark oriented. Instead of developing plazas, squares and public parks, the generous European union investment in the country cursed us with bunch of those plywood zoos, trying to feed us the absurd mentality that skateboarding, bmx and rollerblading are the the same thing, and it’s just natural for us to be locked in a controlled environment and have fun all together. At the time, we didn’t quite enjoy skating with other dudes outside our crew, but most definitely we didn’t vibe with that extreme sports mentality, so the desperate search for a sanctuary didn’t stop, it even become more focused, as we figured out that skating a strip of asphalt and getting baked all day isn’t going to be fun forever.

Well, Christmas came early that year! A sudden glimpse through a concrete wall crack was all it took to finally reach the promised land. The enlighted ones were Armands, Jurgis and Niks.They hopped over the fence and there it was. A 1000 m2 of smooth concrete flatground covered with our hopelessnes and dirt, provoking to be swept away. Just a couple blocks away from city centre pub area, near a police station and firefighters museum a rural area protected by concrete walls and fences, where people get near only if they are lost or saw a free parking spot opportunity. Surprisingly our hype over The Berrics look-alike flatground ran short after a couple of sessions due to the lack of obstacles and enthusiasm to build some. There where a couple of kick outs from time to time led by the landowner and we assumed that soon it will morph into a construction site. So for the first two years it became more like a warm up spot for a street mission or a baking spot after one. We named the spot “Barax” due to the similarity of the flatground to the Berrics. 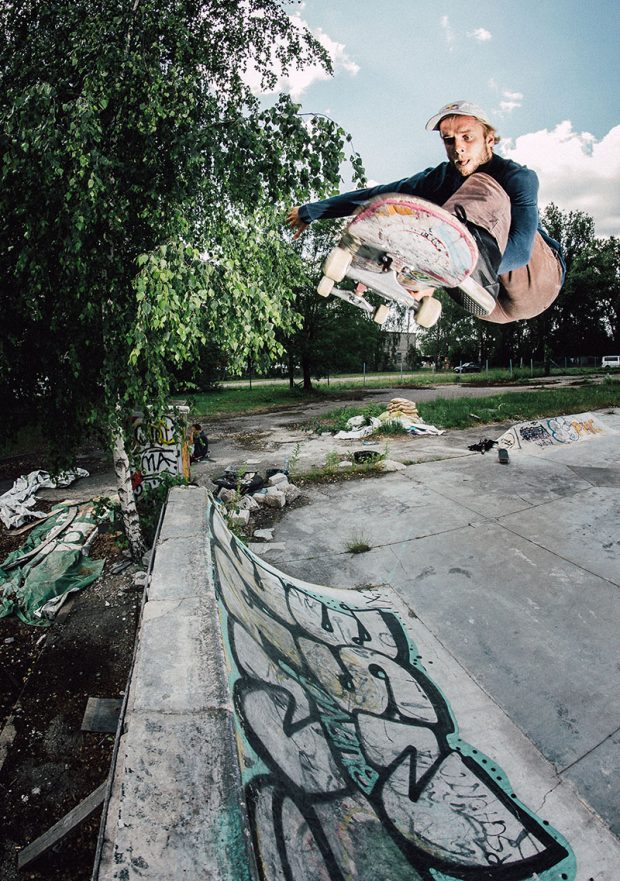 The aftermath of the global economic crisis in 2010 influenced us to start to build long term relationships with this spot. The vision was to create a healthy environment and isolate the noise which can be experienced in every other area. That meant no entrance for anyone outside our crew, the beer bottles and other food related trash should be organized, there shouldn’t be more than four to five obstacles built, and they should reflect city architecture leftovers, like a ledge, rail, shitty little kicker and a pile of wooden blocks to pop over. No quarter pipes, fun boxes or any other type of a classic skatepark element. That decision was made mainly because we wanted to get clips there that could be put together with street footage, it would suck to the bone if it would look like a skatepark. The first illegal construction that was carried out looked like a wooden box with metal coping. Everyone was doing lines that included a flat trick, a trick on the box and finish it with something down a tinny grass gap, which was embedded at the edge of the concrete flatground. Years passed by and we got kicked out more frequently and with more dramatic consequences. Apparently the landlord didn’t quite support the idea of illegal structures popping up on his property, so he managed to destroy them. There were five boxes built during 2010-2015. One of them didn’t last even one day. The last one was built along with a tricky steep A-frame and a 6m2 manual pad. I would pay to see the landlord’s face that day, when he realized that all of that was made from concrete and cement, and it would take more than a screwdriver and army boots to tear it down. It happened that those where the last scars he ever left to our foundation. In 2015 the game changed for good. The property was sold to a company with more reasonable employees, and it happened that one of them was greeting our crew member Armands with his presence. Right place, right time, right people as they say. Armands managed to negotiate on terms, how we can stay there and use that place for our purposes till the capitalism rises back to its peak.

It was beautiful! All we had to do is make sure that we keep the place clean from our trash and unwelcome guests, which actually meant everyone that we didn’t know or didn’t want there. We basically had the rights of a property manager. We were untouchable. Finally we could legally enjoy all the by-product activities of skateboarding, even the cops had to treat it like a private property and respect our rights to be as loud as we pleased. Armands became attorney general of the Barax. He definitely was and still is the most regular visitor. He is the one who has always cared about the sanitary conditions more than others, and has always been conscious about the the vision of Barax staying the same as it was from the very beginning. Since the first video edit came out featuring the Barax, where Armands clearly stated: “You cannot come here,” he became kind of a mythological person between the youngsters who dreamed about skating there but being afraid of the stories, what had happened to their brave friends, and didn’t dare to step near the spot.

Regarding our construction practices over the years, there wasn’t much of planning, preparing and organizing work forces, it was more like if somebody got enthusiastic enough about building something, the very next day he’s there with the necessities, and whoever from the crew who are present that day will support him either with helping hands, ciggies and beer, or by just minding his own business. I have to mention that I was the last one for most of the time, while were the ones who embraced the idea of building something and got shit done. Some obstacle constructions took several days, while some took more than a month to build. The most challenging ones were the concrete structures as nobody had that kind of a building experience at that time.

Years passed by and suddenly most of the crew turned 30. The romantic perspective of skateboarding in most of us has faded away unseen. We suddenly found ourselves building two quarterpipes, and allowing more and more dudes to cross the fence. I guess it was inevitable as the fact that some day the place will come to an end. According to a news portal by the time I’m writing this, there already should be heavy construction unit making room for a giant business centre building. But for a blessed reason we have been celebrating the last day at the Barax for already three weeks. It’s heart-warming to see dudes going hard for the last opportunities either to get a clip or to get wasted every afternoon, but it’s nearly heartbreaking to comprehend the fact that it will all end just like that any day now. It looks like a DIY skate spot from the outside, but from the inside it’s 12 years of a beautiful fellowship, mindblowing life experiences, sweat and blood, new friendships/broken friendships, skateboarding. A bunch of dudes lives were strongly shaped by that place including mine. It’s now that I realize how lucky we are that after 12 years we all still hang out together and skate, and it has a lot to do with this place.
Thank you Barax!