Josh Mattson testing out the Roosevelt Park in San Jose.

The Roosevelt Park in San Jose is similar to the Santa Cruz skatepark. Not surprisingly, both are designed by everyone’s favorite skatepark designer, Zack Wormhoudt, who arguably has increasingly improved his skills by his 100th design attempt. I suppose Wormhoudt, a renowned surfer, building skateparks could be seen like Tony Hawk building wave pools. It doesn’t make much sense, but then again, Tony Hawk’s father didn’t make one of the first wave pools in the United States. And that’s all I’m gonna say about Wormhoudt from here on out…probably.

PARK REVIEW:
The “pool” at the Roosevelt Park is more of a Mickey Mouse/Clover bowl than the straight Peanut bowl in Santa Cruz. The extra pocket allows for a little more creativity and more lines, rather than getting stuck in the same figure 8 variations.

The small/medium bowl starts out way too small (3 feet / 1 meter) and builds up to a medium sized section (5-7 feet / 2 meters) with a few “obstacles” that don’t really make sense. For example, the “twinkie” in the middle takes away all your speed unless you just blast an air over it. The street course sucks for the most part, unless you can transfer out of the bowl to the quarter, or the wall ride under the ledge is exciting for some people. But I generally hate street courses in skate parks except for the Portrero/SF Skate park.

Somehow, with all it’s short comings, it’s still a fun skatepark, worth hitting up if you are in San Jose, or in a 50 mile radius. The pool alone is worth admission, which is free. No pad nannies either. – J. Hay 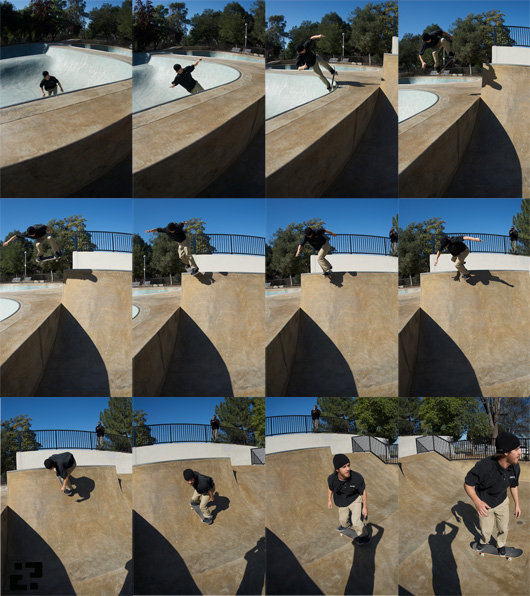