Rog Skatepark in Ljubljana, Slovenia is in danger of getting shut down. Please read the following and check out the article and sign the petition to help save this community built skatepark and creative center.

“The City municipality of Ljubljana strikes on Autonomus Factory ROG again. This time even heavier than back in 2016. Hoping for the best and wishing all the users of the Factory peace and strength in finding the best possible solution!” – Tibor Rep

“With the renewed escalation of pressure from the City Municipality of Ljubljana, we turn to you with a public appeal to the city administration to agree to an open dialogue with the users of AT Rog, which we’ve been trying to establish in vain for three years. Instead of violent confrontations or closed negotiations we are striving for an open discussion about the future of the Rog Factory in cooperation with the interested professional public. We ask you to contribute to our petition and help find a common, transparent and non-violent solution to the conflict.” – Avtonomna Tovarna Rog

Finding places where we can freely express ourselves must be something we all secretly yearn for since childhood. That little wooden house tucked away a few kilometers in the woods or the mysterious abandoned military bunker. A few years later we find ourselves arranging old sofas in our new real estate discovery. Occupying territory is in our blood. It keeps us alive and makes our mind playful. We are almost ready to become squatters. Well it really is a great practical alternative to capitalism in spite of the fact it is not always very effective in opposing global corporations and local land developers. Squats complement cities in a lot of ways that are not usually taken into account by politicians, media guys and the broad public. It is hard to find such an organic and successful transformation of a neighborhood anywhere else in the city.

Anže Lemovec has both eyes on his nose grind routine. Photo: Peter Fettich

When squatting takes root in urban areas it is likely to give birth to a wider movement. A closed down bike factory, Rog in Ljubljana started as an open space available for all non-profit activities. This is not a squat only for young radicals, but also a space open to all who want to learn foreign languages, create art, engage in all sorts of physical activities, and organize meetings and gigs. In eleven years it has grown into a city of its own with studios, galleries, a library, social center, breakdance studio, two skate parks on the ground floor, a small improvised park with a gallery on the second floor and a unique mini ramp on the third. Wonderland for a skateboarder. 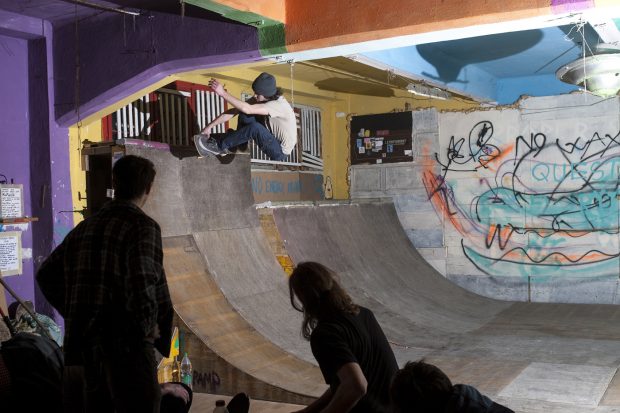 Creator of this ramp’s pool copings avoids his own work and just goes for the transfer. Gregor Skok is not attempting to impress. Photo: Peter Fettich

In the summer of 2006 a few BMXers started to work on the ground floor park. »There was no such place in Ljubljana or anywhere else in the country. We were motivated and worked like mad. It took us a few years as we financed everything by ourselves. Epic Slovenian skater Boris Petkovič, Samo Bajec, Jure Komac, Nejc Vrabelj, Rok Jarc and many others offered a helping hand,« explain Matija Juvan and Mitja Vasič, current gatekeepers of the park. Later they started working on another park in a smaller hall, which got reconstructed a few times. Next to a micro and mini ramp it now incorporates the only indoor concrete bowl in Slovenia. Primož Špacapan, the man behind the Rog bowl, remembers: » The build took a year. It was a slow process. The toughest part was the preparation before the pours. Mostly because of my idea to build the bowl with pre-cast concrete, using Styrofoam and packing tape as a mold. It would mean no heavy loads of rubble, which we didn’t have on site. It was a brilliant experience and I loved every single dusty bit of it. There were at least 50 people involved. The feedback was really positive. People came to skate the bowl but also the whole renewed small park.

«They finance themselves with donations from the park users and occasional parties and concerts. We’re moving upstairs to the second floor where a group of younger skaters took care of another park with a few wooden elements and a small concrete quarter. »  The initiator was Boris Košak with a few of his friends. By the time I joined, the guys did most of the hard work. Soon the room next to the park started forming. For the first two years it was our hangout place,« Hanna Juta explains the beginnings of the park and formation of the so called Plac Boris, a small event room next to the park. In the last few years the cultural aspect took over and the place got more equipped for hosting bigger events. Neža Jurman aka Nez Pez, another active lady joined the group as the place evolved. They prepared three zine fairs called Caffeine Hours, had several expos, literary events, few parties and concerts. People came from all over to perform and exhibit. All the money they’ve earned went back to the place. I would refer to the second floor park more as an open skate space filled with random obstacles, where you can come to skate and create, add new elements to the spot, combine the wooden structures and just have fun with what’s on site.

Man of the hour. Nejc Franetic – Deso gives his board a helping hand
through this crusty R.O.W.st beef 5-0 grind. Photo: Peter Fettich

No energy drinks, no scooters, no junkies and no assholes. These are the rules on Deso’s infamous mini ramp one floor higher. It’s right next to the brilliant studio he shares with his girlfriend Tati. »The ramp used to belong to our friend Mitja Modic. It was a bit higher back then. He moved away for studies and the ramp stayed behind. We had an idea to move the ramp to Ljubljana. It’s a hundred kilometers drive in one direction. We had to go twice. The hardest part was surely the transport of the wood to the third floor of the defunct factory,« Deso illustrates the historical ramp move. The ramp is rough and a tough cookie to ride. It has pool copings on both sides, which have been recently replaced with new ones and a built-in Postojna 53 road sign pointing to the death-box, which is also a micro gallery. There are no opening hours on the third floor. Most of the skaters cannot come further than a rock fakie on that ramp. »I keep hearing people saying that the copings stick out too much or that the flat is too short. I have a simple question. Why should every ramp look and feel the same? We should build different kind of things to skate on. I love it when the ramp is raw and difficult to do tricks on. That’s a challenge. If everything hurts after the session and all I did is a few 5-0 grinds I’m the happiest man on the planet. You won’t know until you try it, « Deso welcomes the brave ones to the ramp.

The Rog factory has to be recognized and supported for what it is, a vibrant social center at the very heart of Ljubljana, eagerly including the excluded. And skateboarders take a big role in making the place even stronger. Last year the city tried to evict and bulldoze a part of Rog. They see it as an obstacle to their future urban projects. They came in the middle of the night so they wouldn’t find any resistance. The Rog nation managed to resist by organizing a never-ending festival and opening the place to a wider public. Musicians, artists and performers came from everywhere to give support. Just to show how important a place like this truly is. In the end, Rog was built by people, active citizens, who devote a great part of their lives to providing autonomous and low-cost solutions to many of the city’s flaws.

Ali Jusovic fell into a burning ring of fire doggy style and made it to the other side. Second floor improv park. Photo: Tomaž Šantl 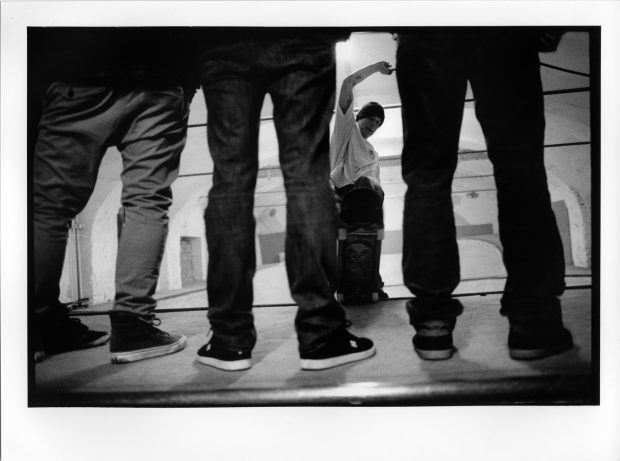 Kupa has no trouble with his frontside blunts. These lazy legs on the deck probably do. Photo: Peter Fettich