So it was time to migrate south for the winter, or at least for a few weeks. Destination Zürich, Switzerland. I figured I would only get to skate a few of the indoor wooden parks due to the winter weather, so I decided to pick up my snowboard I stashed in the Skateboard Museum in Stuttgart in 2007. An overnight stay would break up the drive down from Cologne and I could hang out with my buddies Daniel & Jürgen who run the skate museum and happened to be in town for the weekend from Berlin. Jason Parkes also lives in Stuttgart, and while Daniel & Jürgen were receiving an award from the city for teaching kids about Skateboarding, Jason and I headed over to the new Concrete Skate Park built by Matt Grabowsi’s Minus Pools.

Without even skating 1/2 of the cement skate parks in Germany, I’m claiming this one is the best (with the exception of Hagen which is more like a pool replica than a “skate park”). It’s gnarly. It’s almost Oregon gnarly. One of the best Germany has seen. There will be more, there will be better, but for now, this is the best cement park in Germany and worth a trip to Stuttgart alone to skate this for a few hours, or a few days.

Ollie off the other side of the cradle

Ollie to truck bash in on the taco.

After shooting photos for 20 minutes, I decided it was time to skate the park myself. I dropped in, pumped down the waterfall, whipped around the big bowl, plenty of speed back up the water fall to the shallow end and then LIGHTS OUT!! Everything went black…..no, not a concussion, the automatic lights suddenly shut off halfway through my first run. God damn it! Well, I sacrificed my skate session so you all could see some ripping go down in the park. And of course there would be a session the next day in the day light!

As it turns out, the skateboard magazine Place was having a game of S-K-A-T-E at a local bar in downtown. A place called Mata Hari. I told Jason he should enter it. He wasn’t that interested but figured it was worth checking out. On the way there we passed the legendary Stuttgart Brick Banks. We had a 10 minute pit stop at the banks and then pushed on towards the town center.

We arrived at Mata Hari and squeezed through the crowd and descended directly to the basement. I guess it was “VIP only”, but since we had skateboards, they thought we were there for the contest. Jason sporadically decided to enter as the game had just started and there was only an S and an S-K on the board. The judging seemed a bit rigged, and he was quickly eliminated as a couple of his tricks got the WTF? sign. But in all fairness, the other skaters were mini ramp champs on the challenging close-quarters and took some nice slams into the brick walls. 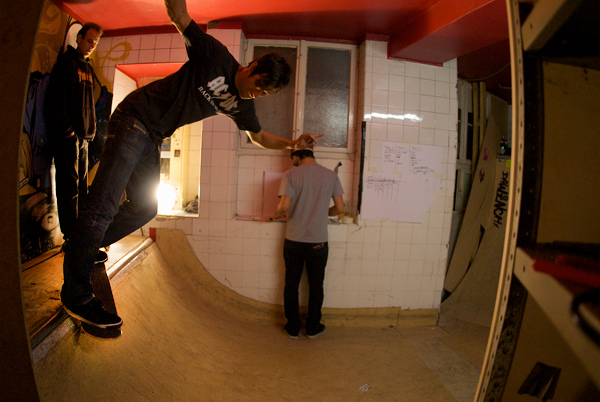 Smith Grind to avoid the S-K-A

They actually had this contest broadcast live to a large screen upstairs in the bar which was practical considering there was only room for about 10 people, including the 5 skaters (2 videographers) and me. Well, there wasn’t even room for me. I had cords and video cables wrapping around my neck and when I later discovered we were being televised on the big screen upstairs I felt like Big Brother was watching me, or more like Little Sister(s) were watching…there must have been over a 100 German college kids in the bar drinking beer. So I got out of the claustrophobic basement and went upstairs and had some beers.

The crowd thinned out, nothing else really amusing happened, Jason left, Daniel showed up after his awards ceremony, we got a Donner Kebab and headed back to the skate museum to sleep. Somehow the subject of me going to Switzerland came up and the fact that I didn’t have my passport (US or UK), which alarmed Daniel and he said for sure they won’t let me into Switzerland without it. What? I have to drive back to Köln 400 kilometers and then back 400 kilometers, instead of just driving 250 kilometers south to Zürich?? I’m going to sleep. Things will be better tomorrow.

I woke up groggily the next morning to Jürgen showing up with a new espresso machine we tested the shit out of. I told them of my nightmare about needing a passport… Nope. They both confirmed it was absolutely necessary I have my passport and not to bother attempting to cross the border – there was no chance of getting in with my sketchy looking bus and sketchy looking me. So no Museum Bowl session, no real first session at the Stuttgart skate park…nothing. 8 hours of driving to get back to where I was and then another 4 hour drive from there, solo, with and iPod + tape adapter and my own thoughts to stew on.

I filled up my canteen with 4 espresso drinks, bid my farewells, and totallyblowingit‘s and hit the road. 4 hours north to Köln, after 8 minutes back at my apartment in Köln making more coffee and grabbing my passport(s) I was back on the road south, and crossed the border to Switzerland by 11pm.

“Anything to declare?” nope. “Where you going?” ummm Dietikon, or Dietlikon, near Zürich…. “What are you doing here in Switzerland?” My girlfriend is living here. “Oh enjoy your time in Switzerland!” says the nicest authority figure I’ve ever met.

Are you fucking kidding me? You don’t want to see my passport????